“He is mute, too, and knows how to read and write?  In English, too?” This was the reaction of one woman to one of our Deaf field workers.  We met her out in the villages, 57 kilometers from the city of Kampong Cham.  This woman had never been to the city of Kampong Cham and was blown away this future could be possible for her deaf brother as well.  As many in the villages do, she described those who are deaf simply using the word mute.  The full word commonly used here for a person who cannot hear is mute-deaf, though, unfortunately, that is often just shortened to mute.  Our hearing field team in Kampong Cham was doing a great job, in addition to explaining our purpose and programs, explaining the politically correct wording. While all their work was fantastic, it was impressive to see they would take on this challenging issue and address in a way that did not make those receiving the feedback feel they were ignorant or wrong.

In one day, the team covered at least 120 kilometers of ground and met six deaf people in two different villages.  Two were too young for our program, two were too old, but two will hopefully be able to join our Basic Education project in 2016.  The hope in the eyes of the families was astounding, and worth every kink from bumping along in the hot sun. 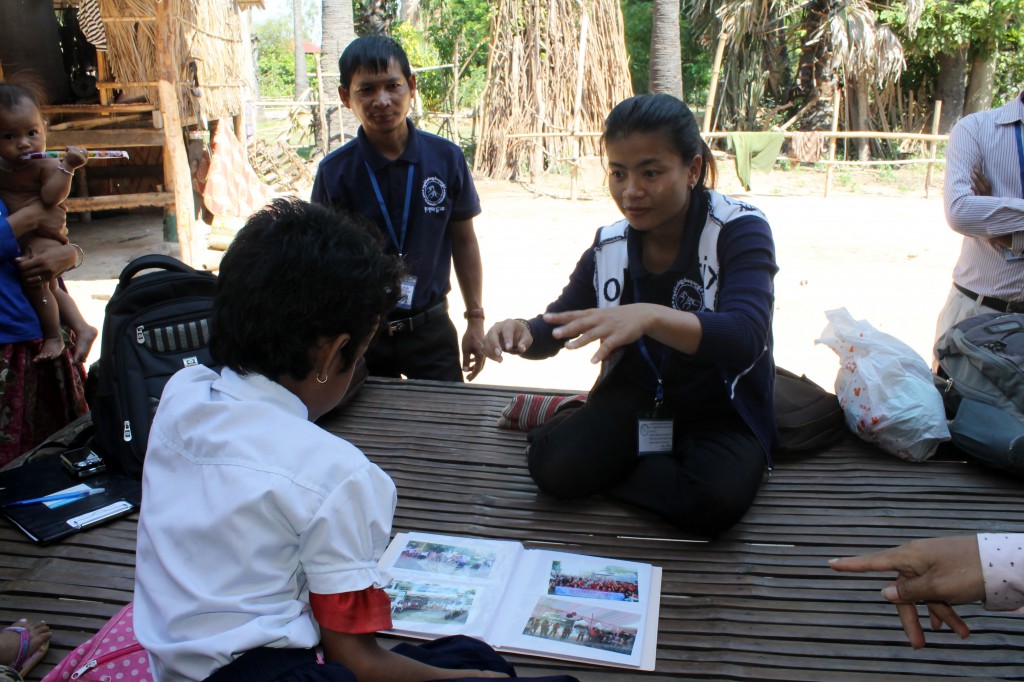 Our field workers showing a young girl photos of DDP, our activities, and projects.  She was definitely entranced.  Hopefully, in a few more years, she is able to come participate. 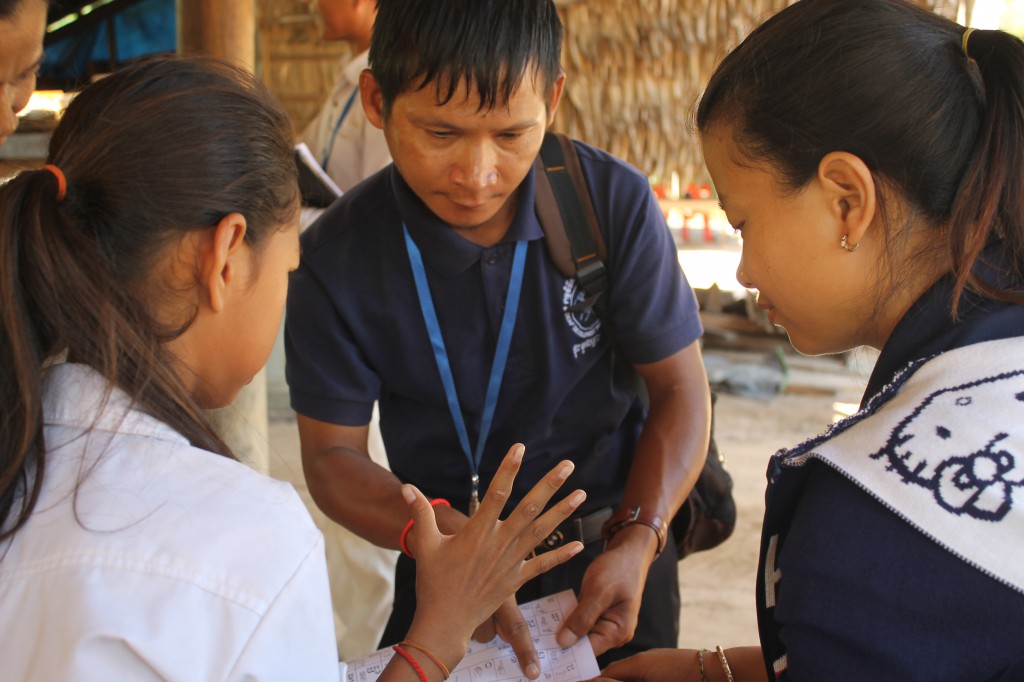 Another young woman starting to learn the number signs.  Each person we met was provided with a sheet showing the letters and numbers, so they can practice on their own. 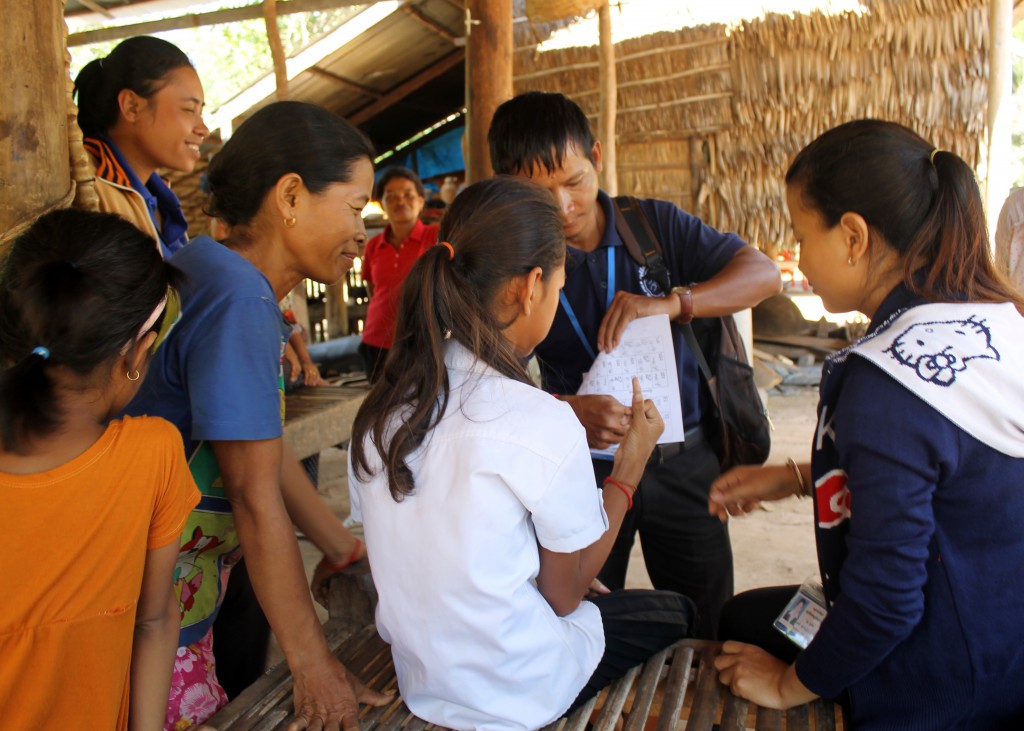 Some of the hand shapes are a challenge for the inexperienced signer, but the field workers eagerly help.  Hopefully, the family looking on will not lose their enthusiasm and will continue to be behind this young woman 100%. 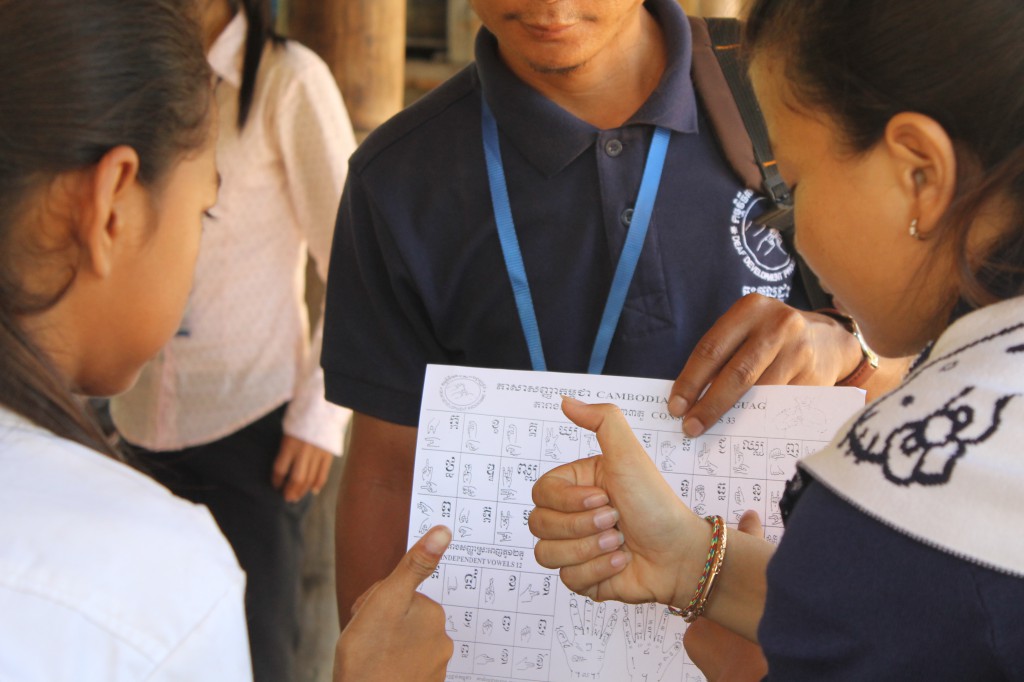 She caught on very quickly with each new letter.  She has been lucky enough that the local school allows her to attend and so she can write the letters and some basic words.  This no doubt helped her to better retain those new signs. 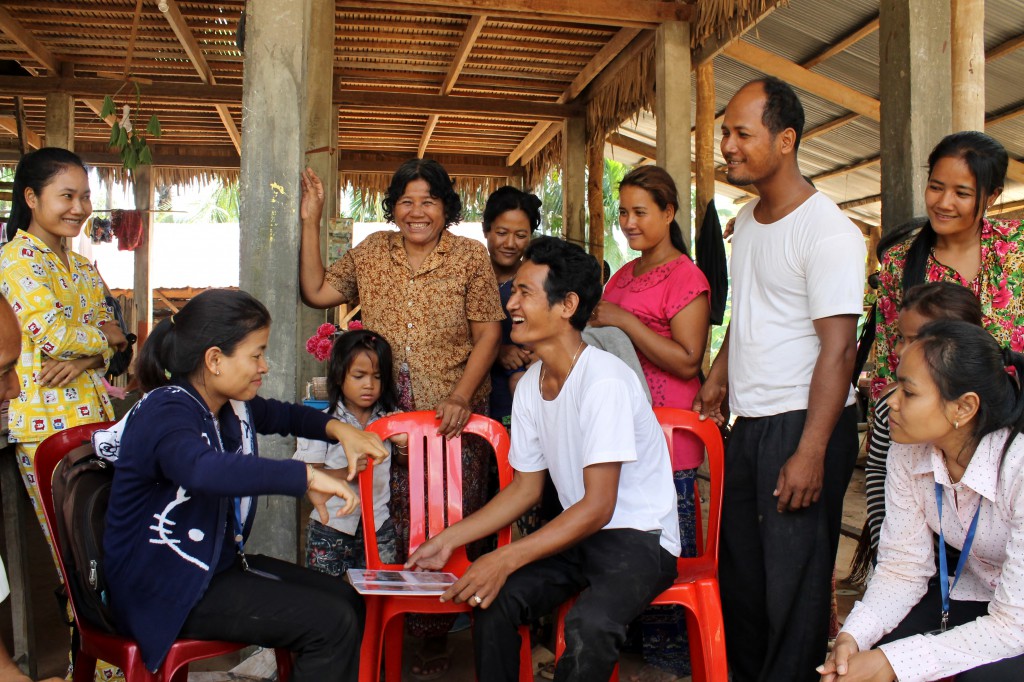 At our next house, the whole family was enthusiastic to learn about the opportunities for their son/brother/uncle.  He also seemed to be fully incorporated into his family and they had a very well developed set of home signs they all used to communicate. 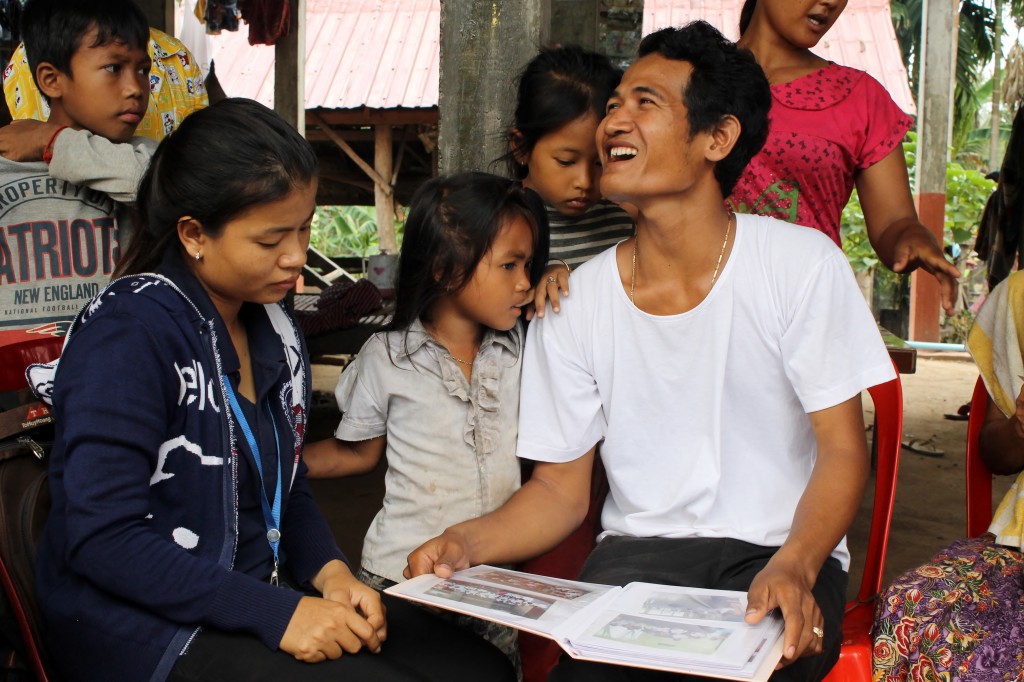 This young man loved to look at all the photos the field workers brought to show him.  As did his nieces, nephews, siblings, parents, and a few neighbors. 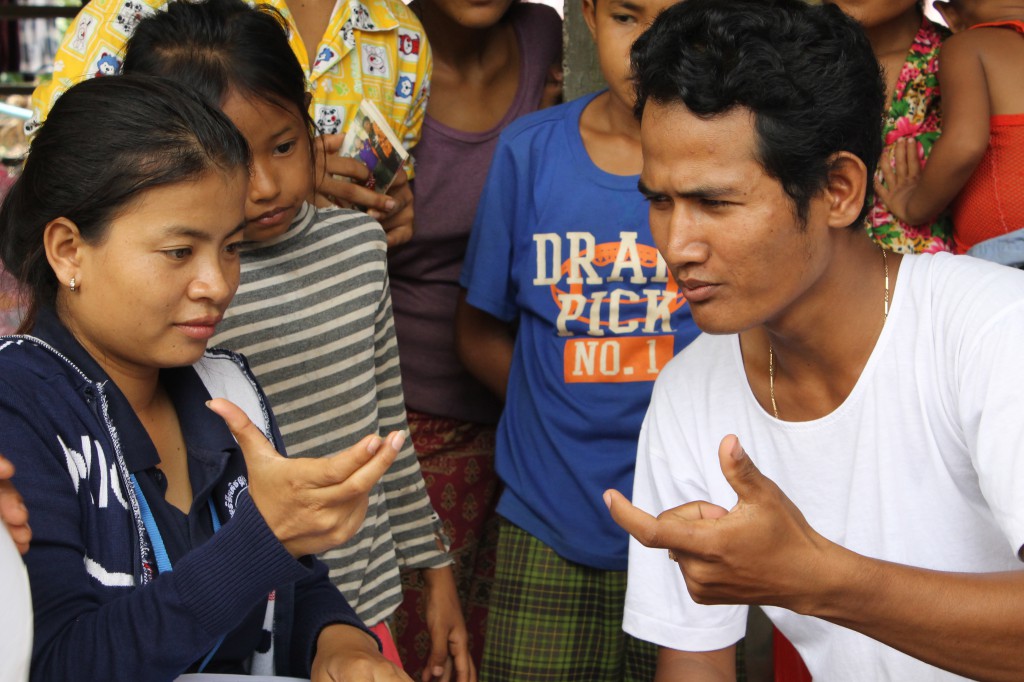 He, too, showed great focus in learning the alphabet signs.  Though, he did not have much education as the teachers refused to let him advance past the second grade, at which point he stopped attending school. 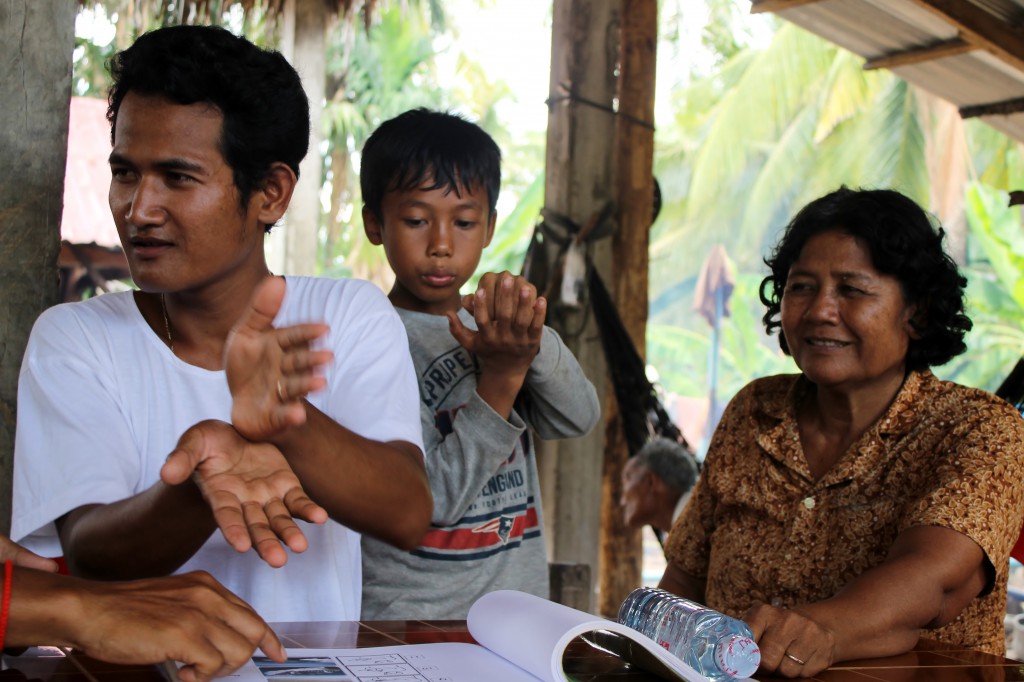 This gracious family offered us the use of their table to eat our lunch, which meant this young man had lots of time to look at the book of signs.  He could easily connect the signs and pictures and would laugh out loud at some, showing us the home sign he had developed.  His mom and nephew were also enthusiastic to give it a go.