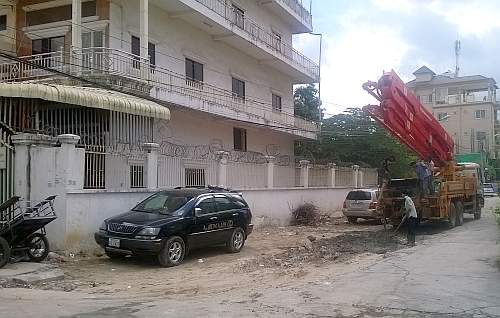 Pouring concrete on the road next to DDP

The road next to the Deaf Development Programme office in Phnom Penh has never been fully opened.  The end at the far right of the picture is permanently blocked by squatters.  The area here beside the DDP office was previously blocked by squatters but the landlord for our building (the large building behind the wall on the left) apparently paid them off and they moved, leaving a large muddy area next to our fence.  Today a concrete truck pulled up and started dumping its load.  There was no leveling or preparation of the ground, no forms, nothing.  Probably the landlord just used his own money to pave it over as cheaply as possible.